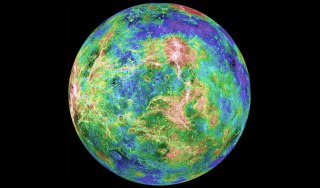 Anyone can tell you Venus is the second closest planet to the sun. Or that it’s hotter than the devil’s underpants on the surface (over 850-degrees Fahrenheit). Or that it rotates backwards. Pish posh! I’m going to leave all of those vanilla facts about Venus to the myriad of sites that like the mediocrity of repeating what’s been said too often.

This list is a list of facts about Venus that aren’t normally covered, and that people generally aren’t aware of.  These are rare, uncommon, and intriguing tidbits of trivia that you can share and delight your friends with. If you already know them, well bully for you.  Stop being a smart-ass and rubbing it in.  Let the rest of us learn something new.

1. It was once believed that Venus had a moon.

In the late 1600s Giovanni Cassini looked through his telescope and saw an object close to Venus. He saw it again sixteen years later and declared he had discovered the moon of Venus. A mad rush ensued to confirm these observations and other astronomers chimed in with positive results. You might recognize such names as Andreas Mayer, James Short, and Joseph Lagrange.

Other astronomers never saw the elusive moon on Venus, and for over a hundred years the search for absolute proof of this mysterious moon raged on. The moon of Venus was given the name “Neith,” after the Egyptian goddess of war and hunting. Finally, though, the debate was laid to rest in 1887 when it was determined that in nearly every instance of Neith-sightings, the object misconstrued as a moon were, in fact, stars in the background.

As bright as Venus is, and for as long as humans have been observing and cataloging her movements in the sky, people still look up and are surprised by the sight of our sister planet on the horizon.  It’s not just farmers in the midwest who see aliens and UFOs, people.

Early one evening in 1969, former President Jimmy Carter reporting seeing a “strange object” about 30 degrees above the horizon to the west of where he was standing.  He later testified to the International UFO Bureau:

There were about twenty of us standing outside of a little restaurant, I believe, a high school lunch room, and a kind of green light appeared in the western sky. This was right after sundown. It got brighter and brighter. And then it eventually disappeared. It didn’t have any solid substance to it, it was just a very peculiar-looking light. None of us could understand what it was.

After the incident, years later in fact two Ufologists determined that what Carter saw was, in fact, Venus and he may have been seeing a “halo effect” around the planet due to atmospheric conditions at the time.  Carter went on record denying that what he saw was Venus and stating that, as an amateur astronomer himself, he would know if had seen Sol’s second planet.

Evidently, of the twenty or so people standing with Carter, none could remember the incident seven years later or didn’t find it significant or noteworthy.

Venus has been called both the Morning Star and the Evening Star.  This is no coincidence.  Ancient astronomers mistakenly thought that Venus was two separate planets as they could see it both evening and night sequentially. They even had names for each aspect: Eosphorus as the morning star and Hesperus as the evening star. The planet Mercury, too, had a similar case of split personality.

It wasn’t until later, when Eosphorus and Hesperus were confirmed to be the same wandering star, that she earned the name “Venus” after the Roman goddess of love and beauty.