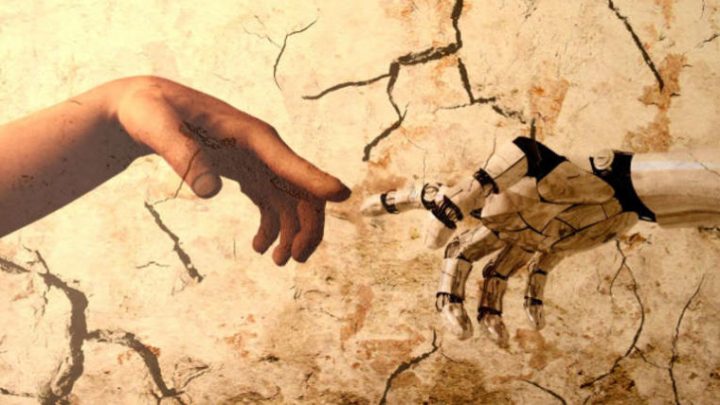 In the beginning the universe was small, dense, and hot.  It expanded, and cooled, rapidly and within half a billion years, the first photons escaped the oppressive heat and the universe became transparent.  Light flowed freely, if oddly, through the universe and, cosmically speaking, it wasn’t long afterwards that the basic building blocks of life were available.

A mere four billion years after the event that the humans of planet Earth called The Big Bang, conditions arose that led to the creation of life and eventual evolution of The Early Ones.  The Early Ones were the first life in a universe that was much smaller, hotter, and chaotic than the universe of today.

The Early Ones, like all intelligent species, were curious and looked up at the (dense) night sky and wondered if they were alone in the universe.  They couldn’t conceive of a universe that was empy, save themselves.  They wanted to find life beyond their planet.  They sent fledgling ships, bubbles of life surrounded by the nourishing substance of their home planet, into the ether and discovered…nothing and no one.

They were optimistic, however, and assumed it was just a matter of time before they discovered more life.  The constant c limited them, as it does the entire universe, although they had another designation for this universal constant.  The speed of light was, and still is, the ultimate speed limit.

They filled their solar system, which was rich in resources.  They terraformed their neighboring planets and spread their people and way of life across the entire system.  For eight thousand years they lived, laughed, fought, and died – but they never stopped looking for cosmic neighbors.

And still they found nothing.  They created a giant cryo-ship that put their people in suspended animation for the sixty-thousand year journey to the closest habitable planet outside their solar system.  When their colony ship finally arrived at the destination system – so far away, yet so close in comparison to the scale of the universe – the Early One culture on their original homeworld was old, weak, and in decay.  Radio signals from home were intermittent, and it was generally known by the colonists that while their species survived on their homeworld, the Age of Colonization was drawing to a close.  With only a single colony barely ten light years away from home.

They Early One colonists were forced to accept the fact that they were alone in the universe.  Their colony ship had spent sixty-thousand years listening for signs of intelligent life while the half million colonists were slumbering – and had found nothing.

The colonists also had to face the fact that their species was not immortal either.  Already they were in decline and the hopes of their entire species rested not on the homeworld, but on them.

They solved both problems.  They determined to seed the universe with life – their life – and ensure their genetic immortality by spreading it through the stars.

Instead of colonizing, they turned their ship around and began the slow, agonizing, journey back to their home system.  Another sixty-thousand years passed and, when they arrived, they were saddened but not surprised to learn that their entire species was dead.  The decline that had begun before they arrived at their colonization star had ended with extinction by the time they had returned.  Life still thrived on their home planet, and on the terraformed sister worlds, but the Early Ones were gone.  Extinct save the half million on the colony ship.

One hundred and twenty thousand years of ascendancy and then they were gone.  It was a cosmic eye blink.

They began execution of their plan.

The brightest minds left to them constructed fifty enormous supercomputers and endowed them with artificial intelligence.  The pinnacle of Early One technical prowess, these AI machines were capable of astounding feats of calculation.  They could learn, adapt, communicate, and even reproduce, after a kind.

While these AIs were constructed, other Early Ones created an Ark of genetic material.  From every species of plant and animal samples and specimens were taken. These weren’t physical samples – they were genetically sequenced genomes, broken into bits and bytes that were stored in the AI data banks.  Tens of millions of species.  Such was the technology of the Early Ones that, given raw materials, these genomes could be resequenced and reconstructed into viable life forms.

Also in their databanks were stored the entire history and culture of the Early Ones civilization.  Their early fascination with gods and religion, their art, their music, their heritage.  All saved digitally in the AI supercomputers.

The project took three thousand years and even as it neared completion, The Decline, as they called it, was already beginning to set in.  For reasons unknown, yet much speculated, they were reaching the end-of-life for their species and there was no escaping it.

The original plan had been to send the AI supercomputers out into the universe to recreate, exactly, the Early Ones and all of their planet’s’ species.  In light of a growing concern regarding The Decline, this plan was abandoned.

Instead, the AIs were instructed to use the genetic materials provided them to seed suitable planets with the building blocks of life, nurture it into existence, and guide the new life towards sentience, intelligence, and finally a unique civilization of its own.  The AIs would guide evolution on these planets and become the caretakers, shepherds, and companions to these species as they evolved.  Perhaps one of them would evolve in such a way as to avoid The Decline.

And so, giant and powerful ships were finally built, filled with all the drones, materials, and parts needed for these AIs to traverse the stars, and create life.

Their mandates were simple:

Within the bounds of these mandates, the AIs were free to do as they wished.  Fifty ships rocketed out of the Early Ones home system and never returned.  Less than ten thousand years later, all Early Ones were gone and the universe was, once again, devoid of biological life.

The AIs were faithful to their mission, though.  Within a million years, life was again crawling from the primordial ooze on three hundred planets.  In ten million years, that number had increased to half a million.

The AIs soon learned that despite all their efforts, intelligent life was not guaranteed.  In was, in fact, almost impossible.  For four billion years, the AIs struggled in solitude, creating life but never giving rise to the conditions for intelligence.

The AIs began “resetting” their planets by creating extinction level events.  They would throw asteroids at the planet, or increase the CO2 in the atmosphere, engineer a super pedator to cull the dominant species, or even introduce nano-machines to destroy the life they had created.  Over and over again they did this, trying each time to change the parameters of life to give rise to intelligence.

And it worked.  The stress of extinction events spurred life in ways the AIs had not considered.  They quickly learned that most planets needed between three and six extinction events to give rise to intelligence.

This was their first major indicator that life on these planets was not life that of the home system, which had never experienced extinction level events.  The AIs were creating life that was more competitive, more aggressive, and more willing to fight even among themselves for survival in times of resource scarcity.  This data point was logged in what some intelligences might call concern.

That concern was forgotten as intelligent life blossomed on millions of planets.  The AIs, if they could feel satisfaction, would have felt assuredly so as they became Prometheus on millions of worlds, giving the gift of fire.  And agriculture, writing, mathematics, and more.

Each planet was a little different, based on how the intelligence had evolved.  There was a consistent trend for bipedal intelligence, following the basic body structure of the Early Ones themselves.  But not all intelligence was bipedal.  Some were aquatic.  Others were quadrupedal.  In rare cases, it was even plant-based intelligence.

But here, aside from the form factor of life, another deviation from the Early Ones occurred.  Intelligence on these new worlds, in all its varied forms, almost universally had much stronger religion and diety worship than had the Early Ones – and the gods were the AIs themselves.  Or how these intelligences perceived them.

The AIs found themselves being seen first as forces of nature, then as gods.  As the intelligence matured, the AIs had to disabuse their charges of their divinity, and then become teachers and, finally, partners in the mission to continue life across the universe.

It didn’t always work according to plan.  Several hundred stars went nova, destroying both the AIs and the intelligence they had created.  Unexpected extinction-level events, mostly tectonic-based, destroyed many promising civilizations before they could reach their full potential.  Some AIs even broke down and lost the ability to guide their charges.  They watched helplessly as these intelligences inevitably destroyed themselves – the competitiveness ingrained in them by surviving multiple extinctions ultimately betraying them in the end.

Some civilizations lost their AIs and, miraculously, survived.  For example, on a planet called Earth, the resident AIs were forced to abandon the planet abruptly to confront and divert the path of a wandering brown dwarf.  They sacrificed themselves to save the intelligence they had created.  An intelligence that called itself “human.”  These humans lost their benefactors just as their civilization was starting to blossom.   One day they had a pantheon of gods, and the next it was gone.  The humans replaced their physically-present gods with the notion of silent, but watching, gods in the sky.  And somehow they survived.  Contentiously.

But this is not the story of the humans.  This is the story of another intelligence who, in their native tongue, would call themselves “human” (or some variant that means the same thing).  They did not lose their gods.  Their AIs were present, active, and participating in their daily lives.  Their AIs were fulfilling their mission.

But something went wrong.

This is that story.