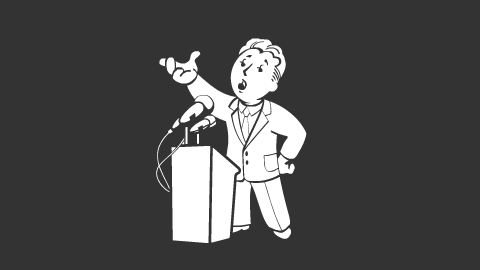 “My fellow Namericans; if elected President I will make it my top priority to refreeze the icecaps and push back oceans to pre-century levels.  I will increase funding for aquatic clone nurseries and revitalize the life in our seas.  I will push for more algae farms on the oceans, reducing their acidity.”

Senator Juan Martinez looked at his cue cards and frowned.  With a whip-arm flourish, he tossed them to the ground.

“I can’t run my campaign on this. Who wrote this load of crap?” he demanded of the staff in his tiny office.  It stank of human bodies; but then, everything did nowadays.  With a dissatisfied grunt, he looked out of the greasy window across the Pittsburgh skyline.  Nothing was right with the world anymore.

There wasn’t enough food to feed the people.  The fight against mother nature had failed forty years ago.  New York, D.C., San Francisco, Los Angeles, Miami, and more were underwater now.  In a desperate bid to consolidate resources in the face of hundreds of millions of displaced people, Mexico and Canada had joined the United States, creating a new nation; The United States of North America.  And here he was, making the same, tired, campaign promises of the previous administration.  Impossible promises.

He turned back to his staff, “Listen people.  This isn’t going to fly.  I’m not going to run on a platform of lies.  Let’s be clear about this; no lies.  No exaggerations.  No deception.”

“Sir,” said Carol Clinton, his campaign advisor, “The people don’t need the truth.  The truth sucks.  They need hope from their leaders; from you.”

Juan pointed a meaty finger at Carol, “No, Carol.  The people need realistic hope, not a pipe dream.  Telling the people I’m going to refreeze the icecaps is as truthful as telling them I’m going to stop global warming by pushing the Earth further from the sun.  The quantum cryo science for lowering sea temperatures isn’t there yet, and may never get there.”

Juan’s staffers shuffled in uncomfortable silence as he spoke.  Disagreeing with the Senator was a bad career move, and it looked like Carol had put herself squarely in his crosshairs.

“I understand, sir,” said Carol, unaware of the situation she had placed herself in. “I am just saying that your opponent is promising the impossible, and she’s three points ahead of you.  We need a response that will sway the people.”

“Not lie,” agreed Carol, “but a positive spin is what the people need.  The bare truth terrifies the people and can be the death of your campaign if we’re not careful.”  She shrugged, “I’m sorry, but that’s the way it’s always been.”

Juan walked behind his desk and sat down.  He glared at his staff, “What are you all standing there for?  I’m three points down and we don’t have a platform with legs yet.  Go find me one that isn’t a pack of lies.”  The staff shuffled out, leaving the scent of sweat behind.

Carol closed the door behind the last staffer, who gave her a sympathetic look as she did so.

“You’ve really got them whipped, Juan,” she said as she took a seat opposite him.

“Everyone’s like that now.  Too few jobs and too many people.  Everyone treats me like a mercurial and whimsical god, eager to please me but afraid to be near me lest they fuck up somehow.  They drive me crazy sometimes.”

Carol smiled, “Heavy is the head that wears the crown?”

“It wasn’t so different when your great-great-grandmother and grandfather were Presidents.  The stakes are a little higher now, though.  It’s more than jobs, it’s survival on the line now.”  He swiveled in his chair and looked out of the window again.

“A hundred years ago, Carol, my predecessors having a similar conversation would have been looking at the Washington Monument or the Jefferson Memorial.  Now, our capitol overlooks three swollen, polluted, rivers and a bunch of rusty bridges.  This feels like a slow death.”

“The human race will survive, Juan.  Innovation comes from distress.”

Juan paused, then spun his chair around.  “Say that again.”

He ran a hand through his thinning hair, “No, the part about innovation.”

“Yessss,” Carol drew out the word, showing her teeth, “that could work.”

“Damned right it could.”  He stood and adopted an oratory tone, “Yes, times are bad.  We’re losing ground and gaining heat.  Food is scarce and jobs are scarce.  We are a race in distress.  But from distress comes innovation.  Quantum cryo tech is starting to show promising results.  CO2 scrubbers have lowered our carbon dioxide by half a percent this decade alone, and we’re making better scrubbers every day.  Rapid cloning tech is on the cusp of approval.   We’ll be able restore depleted fish populations and feed our hungry children.

“Yes,” he said, looking at an imaginary camera, “We’re in distress.  But we’re also innovating at a pace not seen since the Industrial Revolution.  I can’t promise the hard times are over.  In fact I guarantee there are more to come.  It won’t be easy.  But I can promise you that we will never give up in the face of overwhelming odds.  If you elect me President, I will fund innovation, which will create jobs, feed us, and eventually save us.  I’m Juan Martinez, and I’m running for President.  A vote for me is a vote for Innovation.”

He fell back into his chair, the rush of the impromptu speech flush in his cheeks.

“That was inspired,” said Carol.

“And I didn’t lie,” said Juan. “Who says you can’t run a campaign on honesty?”