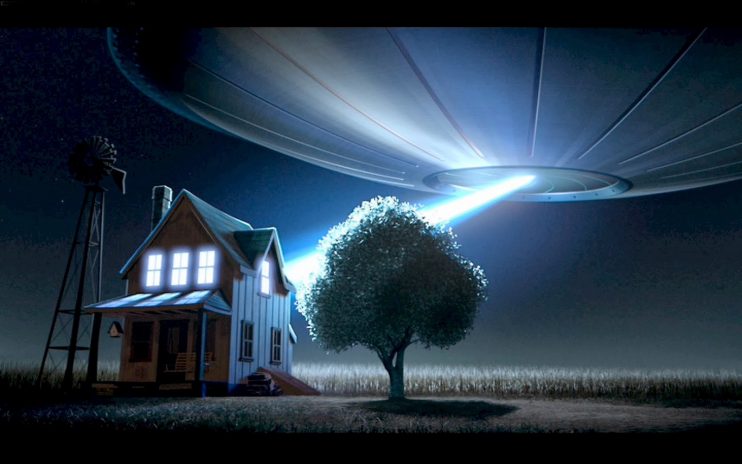 “Don’t worry,” said George to Cleetus as he stepped onto the organic metal plank that had oozed from the spaceship. “I’ll be back by mornin’. I always am.”

Z’tX1 extended a visipod to examine the new specimen as it lumbered on two ungainly legs into the cargo bay. How it stayed upright was beyond the Klamarian, who considered four legs the bare minimum necessary for proper locomotion. Six, obviously, were better. Sixteen legs, like his own, were fit only for the galaxy’s most divine species; the Klamarians themselves.  But two? The fact that this “Hooman” had only two legs made it a laughing-stock.

“Look at it,” said Z’tX1 to his sludgemate, “Two legs. I mean, really, what was the Laxan thinking when he said Hoomans and their world needed to stay in quarantine because of the ‘incalculable danger’ they pose?”

Yn’4S waved her phalanges in disbelief, “Truly, the Laxan was overreacting. The Hooman must use its entire brain just to stay standing.  They cannot be a serious threat. Let us test this Hooman against the other specimens.”

Yn’4S contemplated and replied, “Endurance. The Oohiy specimen has greater endurance than any other tested. Let’s put them together in the cyclomax.”

Z’tX1 bobbed his visipods in agreement, “None have beaten the Oohiy at endurance trials. The Hooman will die.”

“Yes,” said Yn’4S. “And prove that the Hooman’s are no threat at all, are not extraordinary, and we can claim mining rights on their planet for the Klamarian Confederacy.”

The Hooman planet was mineral rich.  Z’tX1 wanted those mining rights.  “The Laxan claimed that Hoomans were extraordinary physical specimens; this will prove it wrong and the Confederacy will overrule the Laxan decree that this planet be left alone.  We can take the planet!”

“A bike?” George asked. “Y’all want me to ride a stationary bicycle?”

The alien didn’t understand his words, but his tone was unmistakable. It waved a lethal-looking device with too many pointy ends at George and a sound like a wet fart emanated from somewhere in the jiggling, leggy, mass that was the alien.

George raised his hands as the device swung towards him, “Fine. Have it your way. I’ll ride your stupid bicycle.”

He jumped on the bicycle, his feet looking for the pedals. He found sixteen, lined up in regular intervals one behind the other. The pedals matched the eight pairs of legs on the bubbling ooze in front of him. He picked the two pedals most comfortable for his position and began spinning the wheels on the bicycle.

“Why y’all makin’ me do this?” asked George as he settled into a comfortable stride. “Usually one of you aliens poke and prod me.”

The alien didn’t answer, opting instead to usher in a six-legged polar bear with four arms. Another alien. George watched warily as it was led to an identical bicycle next to his. The polar bear knew what to do; it immediately climbed on the bike and started pedaling, glancing occasionally at George.

George tried a friendly smile at the polar bear. “They got you riding this silly contraption too, huh pal?”

The polar bear didn’t answer, and began pedaling faster. George was rewarded with a sharp electrical shock that ran through his buttocks and across his body.

“Hey!” he exclaimed, “This damn thing just bit me!” He tried stopping the bike, but as he slowed, the intensity of the electrical shocks grew. He quickly sped up again, and the shocks diminished.

The polar bear glanced at him, chuckled, and started pedaling faster. George felt the shocks start up again. The dots connected and George knew what was happening. He was racing the polar bear, and if he fell behind, he was getting shocked.

“Well two can play at that game,” said George as he picked up his pace. The polar bear grunted as the first shock hit its body.

The contest began in earnest. Neither polar bear or human was willing to give ground and passed shocks back and forth between each other as they sped up and slowed down in proportion to one another.

Fifteen minutes later, a thin sheen of sweat formed on George’s head, but he felt great. He was just hitting his stride and his breathing was strong and steady. His legs, warmed up at this point, were ready to go for hours and his heart beat a steady workout pace in his chest. He picked up speed.

The polar bear grunted in surprise as the shock hit it and started pedaling faster. George glanced over and saw that the bear appeared to be struggling to maintain the pace.

“Sorry pal,” he said. “I didn’t know you were a chump.” He slowed down and let the polar bear set the pace. The polar bear wasn’t to blame for this sadistic game – he was riding a bike same as George.

They rode for for an hour. Then two. The polar bear was panting and began slowing.  Its eyes were rolling in its head, reminding George of a terrified calf, so he slowed his pace to match the bears.  For a few minutes, everything was fine, the same as before albeit at a slower pace.  In the middle of the second hour, though, the polar bear let out a keening howl and fell over. Dead. George stopped pedaling and no shock accompanied the move.

“Well damn, son,” said George, looking down at the dead alien. “Weren’t that hard a ride.”

The original alien rushed back into the room, keeping the polar bear’s body between it and George. It confirmed that the bear was dead, set down the weapon on the floor, and slowly backed out of the room.

An hour later, the door oozed back into a plank and let George out, back on his farm. Cleetus was waiting for him.

George handed Cleetus the alien weapon he had picked up, “Put it with the others, will ya?”

George shook his head, “Naw. They made me ride a bike ferchissakes. I sure do wish these aliens would leave me alone.”