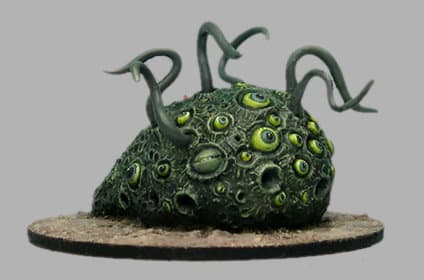 The alien was dying. The wet burps and hiccups that slapped with a wet plop from sub-dermal lips were weak and wispy, not the robust gurgles that were normal in a healthy Jovian. Its epidermis, which should have a thin layer of mucus, was dry and cracked.

I watched from my wheelchair a few feet away. A small, whirring, machine pumped chemotherapy into my veins – destroying the cancer which was eating me from the inside out. Space cancer, as we jarheads called it.

Space cancer in my generation was a big deal. Our Service in humanity’s fledgling space Navy had exposed us to toxic levels of radiation, despite the repeated promises from leadership that our ships had adequate shielding.

Fleet ships today were better shielded, and space cancer was on the decline, but hundreds of thousands of Marines like myself were stricken by the disease. I was one of the lucky ones; my cancer hadn’t shown up until a few months ago. I had lived many healthy years after the Jovian Conflict as a regular, cancer-free, human.

The alien in front of me was another issue altogether. Jovians were the first alien life, intelligent or otherwise, that we had ever encountered. I had, in fact, been on the mission that had rescued them.

Strictly speaking their race wasn’t from Jupiter, but that’s where we found them, stranded in orbit around the gas giant, fifteen year ago. Only the War, the Jovian Conflict, had put humanity in the right place at the right time to find them. Nobody knows where they came from, not even the Jovian’s themselves. Maybe one day, when we master faster-than-light travel, we’ll find out.

I listened to the hospital administrator as the sick alien wound down with a sickly burp. Several other patients, almost all jarheads like myself, were also engaged in the polite fiction of listening without appearing to be.

“I’m sorry; there’s nothing I can do.” She pointed to the ePad in her hand, “You suffer from Prugar’s Syndrome. That’s not covered under your current government subsidized plan.” To her credit, she looked distressed as she passed this information on.

More moist and nearly obscene sounds emitted from the alien. The administrator waited with obvious and forced patience as the translator decoded the message.

“But Prugar’s Syndrome didn’t cause the dryness in my fluid mixer!” The gelatinous mass shook with visible emotion, “I would not have caught Prugar’s had you humans not brought us to Earth. Prugar’s never happened before we came here. You fed us that damned sassafras soup and it changed us!”

What had been a mildly sympathetic audience hardened and turned sour. Public sentiment against the Jovians was hit or miss. In general, everyone wanted to save them, help them, and assist them as they crawled back from the brink of extinction.

More specifically, though, there was an undercurrent of resentment against them as well. They had been living little better than savages in a derelict ship and they blamed humans for saving them. They were a burden on a society already struggling with economic solvency in the face of an overheating world.

The Jovians called the life-saving nutrients that we had we pumped into them when we found them “sassafras soup;” some joke by a human biochemist that had stuck. How could anyone have known that it would subtly change their genetic makeup? We didn’t have time to study the concoction – the Jovians needed immediate help.

And now they blamed humans for their health problems; for giving them a home, a place among us, at considerable expense and sacrifice. And they wanted free healthcare as well?

The administrator, noticing the simmering hostility in the observers, seemed at a loss on how to respond. If she was sympathetic to the alien, it could lead to uncomfortable encounters with the rest of us in the room.

I saved her the trouble of figuring out her response.

“Hey,” I said, “What’s the treatment for Prugar’s?” Both the alien and the administrator turned to me. I repeated my question.

“Well,” said the administrator, “it varies but Prugar’s is essentially a cancer. Chemo, radiation, and surgery are the prescribed treatments.”

“So you’re telling me,” I said in a voice pitched to carry across the entire room, “that this Jovian is suffering from the same disease the rest of us in here are? That a cancer is eating it from the inside out? Just like me? That its life will be cut short if it doesn’t get treatment for a disease it didn’t ask for? Just like me?”

A few of the hardened faces around me softened into quizzical expressions. As I had hoped. They were thinking.

The administrator responded, her gratitude evident in her voice, “Yes. It has a cancer, just like all of you.”

I yanked the line from my vein, a small spurt of blood and chemicals splattering on the floor and on my hospital gown.

“Here,” I handed the line to the administrator. “He can have mine.”

The dark grey epidermis of the alien swirled surprised colors of amber and violet. A series of splats sounded from inside it that were untranslatable.

I cut her off. “Will my chemo work for Jovians?”

She looked at her ePad, flustered, “…yes, but…”

A small smile touched my face as I looked at my fellow jarheads. They understood; we shared core values and there was a reason why we all chose a life of Service. The grizzled and battered veterans in chemo chairs around me, as one, grabbed their lines and ripped them out. In solidarity with me, my brothers and sisters offered their treatment to the stunned Jovian.