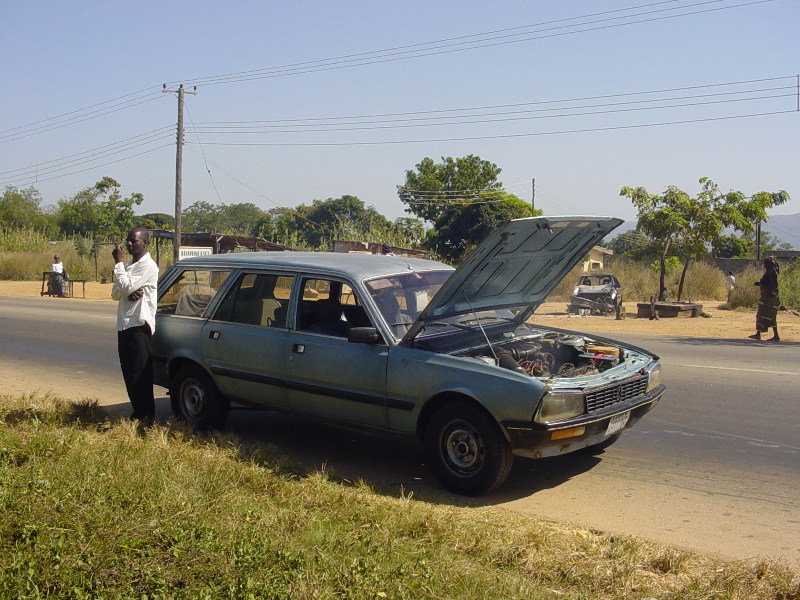 I’d like to tell you that I’m a laid back kind of guy, but I would be lying.

I’m not laid back.  I am passionate, quick to judge at times, and have been battling anger issues for my entire life.   I am just not the paragon of cool and acceptance that most of you think I am.

That’s not to say I don’t try.  Especially since I met and fell in love with my beautiful wife.  She is everything I am not.  She is calm, cool, reserved, non-judgmental, and slow to anger.  I have been working, with mixed results, to emulate her example for almost three years now.

Two weeks ago, I was driving the entire family home one night.  I had three extra teens in my Durango because Matthew had his friends Phillip, Nick, and JB in the car with us.  My SUV may be destroying the planet, but I can fit a small army in it, by God!  We were less than a mile from home when I we came upon a van stopped in the middle of the road.

The van had no flashers on, and it was sitting perpendicular to the road, as if it were pulling out of a driveway and just stopped.  Cars were backed up; as I pulled to a stop I sighed loudly and the events unfolded like this:

“What’s this jacknuts up to?” I sighed wearily.

Carey grabbed my hand, “Just give him a minute honey.”

“Ok,” I groused impatiently, looking at the dashboard clock.

“Look,” I said, hitting the horn,  “that asswipe is making everyone go around him.”  I hit the horn again; not a quick polite honk but a 4-second insult to the idiot in the van.

He waved me to go around him but I refused.  I hit the horn yet again and made shooing gestures with my hand.

“He’s not broken down,” I said with finality.  “Look at how his van is in the road.  If he were broken down his hazard lights would be on and he would be facing the direction of traffic he was heading when he stalled.  He’s just being an asshole.”  I hit the horn again.

The man came around the side of his van.

“He’s not broken down, Matthew,” I said as I rolled my window down and stuck my head out of the window.

“MOVE YOUR DAMNED VAN!” I yelled out of the window at the man.

I sat back, nonplussed for a second, realizing that my son was right, I was wrong, and if I had only taken a second to be civil instead of being an jerk I would have handled the situation so much better.  A wave of instant embarrassment washed over me.  So, I took a deep breath and decided to make up for my poor judgment.

I got out of the car and had the four seventeen-year-old boys come with me and we helped the man move his van out of the way of oncoming traffic.

The driver of the van was gracious and appreciative of our help.  Again, though, my son showed me how to be a gentleman.  He talked to the man as we pushed his van, and learned that he had just spent all of his savings on the van, was broke, and was just trying to limp the van along until payday when he could afford to repair the radiator leak.

My son asked him about the rock band stickers on the back of the van and learned that they were there when it had been purchased, but that didn’t stop Matthew from telling the driver of the van all about the bands themselves and how he was a musician himself.

I just pushed the van and felt more and more chagrined at my behavior with every passing second.  This man had spent his entire savings for a van, had no money, and had let my honking and anger bounce off of him as if it never even happened.  My son was chatting him up, laughing and smiling as he pushed the van down the road.

This man had suffered a far worse day than I.  He was alone, broke, and broken down.  He had every right to be angry with me for my actions towards him, yet he smiled, shook my hand, and thanked me for my help.  He laughed with my son, and insisted that he was going to be OK.  He just needed to let the van cool down and then it would start again.

My son; I am so proud of him.  His father is a jaded cynic who immediately assumed the worst and acted accordingly and he showed me how misplaced my cynicism can be.  He was a bigger man than me; a better man.

I want to be the man my son has grown into.  I have another role model to emulate in my life now.