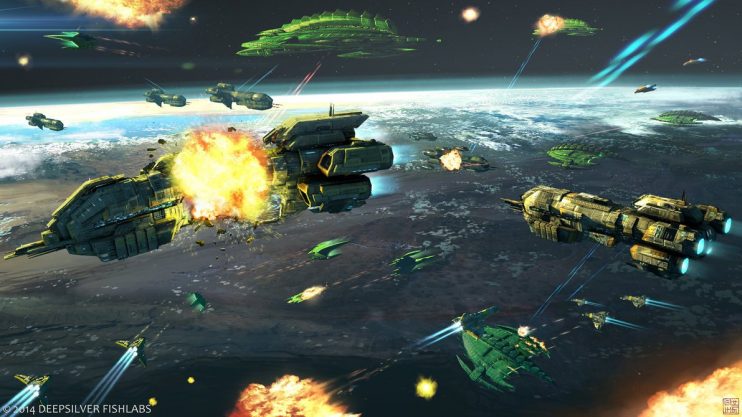 Barkley scratched an itch under his nose and pretended he was outside, running through the grass, and not watching yet another holovideo of a two-hundred-year-old tragedy.  Memorial Week was not an event he looked forward too.  From the rapt looks on the faces of his classmates, Barkley knew he was the only on who felt that way.

There was always something artificial about Memorial Week.  Something forced.  Barkley had never felt comfortable with the week-long event that culminated in the celebration of Yralen defeat.  While everyone else was waving Earth Force flags and proclaiming their patriotism, Barkley just felt . . . sad.

“Are you paying attention, Barkley?”  asked his teacher, Mr. Cooper.  “We’re about to watch our counterattack on the Yralen home world.”

Mr. Cooper held his disappointed gaze for a long moment, letting Barkley, and the rest of the class, know that daydreaming was not appreciated when watching the Humans beat the Yralens.  Barkley turned back to the holodisplay, but he had no desire to watch as human ships dropped millions of EMP bombs across the planet.  He’d seen the EMP bombs up close and personal his entire life.  The monument right outside the school was the shell of an old EMP bomb.

The sadness welled up inside Barkley again as he watched the bombing of New Earth.  This school, built on top of an old Yralen school building, had been where hundreds of Yralen children had died.  That fact was more real to him than the destruction of Earth.  He had never been to Sol and seen the asteroid belt that had been Earth, but he knew that every day he studied his lessons on the bones of dead Yralen kids.

Memorial Week was a drag, and Barkley felt alone.  Left out.  He couldn’t talk to anyone about these feelings either.  His classmates would torment him for not being as gung-ho as they.  His teachers would demand he go talk to the counselor.  It was a safe bet the counselor would refer him to the Injuncts.  If the Injuncts thought you were subversive, you’d disappear, never to be heard from again.

Barkley was glad when the video was over and class dismissed.  He didn’t think he could hold the sadness in much longer.  He gathered his books and joined the crowd leaving school for the day.

“Hey Barkley,” said a voice behind him, “wait up.”

Barkley turned, “Oh, hey Sarah.”  Sarah was in his class, and she lived on the same block.  They often walked home from school together.

Barkley plucked a leaf from a tree as they walked, rolling it in his fingers.  It was an old tree. He wondered if Yralen children had done similar, under this same tree, when they got out of school for the day.  His sadness grew again, and he almost felt like he was going to cry.

“What’s wrong,” asked Sarah.  She was pretty observant.  Barkley scrambled to come up with an excuse that would satisfy her.  Her older brother was an Injunct.

“I was just thinking about the War.”

“Yeah,” she said, her voice tinged with excitement, “I can’t believe how terrible it must have been to watch the Earth blow up.”

They walked for a few moments in silence, passing the EMP bomb memorial.

“Do you ever think about it?” asked Barkley, looking at the bomb.

“What it was like for the Yralen to see all these bombs in their skies.  Millions of them.”

Sarah’s frowned. “Who cares?  They got what they deserved.”  She quoted a popular saying, “The only good Yralen is a dead one.”

Barkley nodded.  Had he not agreed, Sarah would grow suspicious.  Still, the feelings inside him were not getting any less.  He felt like they were suffocating him and he had to say something more.

“This used to be one of their schools.  When we dropped the bombs, Yralen kids were here and they died too.  Sometimes that bothers me,” he said.  “That the bombs killed kids.  And babies.”

There.  He’d said it.  What had he been thinking?  He wanted to run away, run back in time, and slap his mouth before the words came out.  Sarah was going to tell her brother and he’d get taken away.

“Kids and babies grow up to be adult Yralen.  They would’ve try to kill us all,” said Sarah matter-of-factly.  “They got what they deserved.”  She was giving Barkley a funny look and his insides twisted at the thought of the Injuncts again.

“Oh yeah,” said Barkley even before she had stopped speaking. “Totally.  They all got what they deserved.  But…” he thought fast, “… it makes me feel bad that the human fighters had to make that decision.  Even if it was the right thing to do.  How terrible that the Yralen made us do this, right?”

Would the lie work?

“Yeah,” said Sarah, mollified.  “My dad says therapists spent years and years helping the Mad Ones who had all that rage and grief.”

Barkley shook his head in sympathy for the Mad Ones, relieved Sarah hadn’t said anything else.  He felt like an idiot; he needed to keep his mouth shut.  No one understood what he was feeling.

He dropped her off at her house and walked to the park, letting his backpack lie forgotten next to the swing.  He sat on a bench, watching kids younger than himself run across the field waving their Earth Force flags.  They were playing Humans and Yralens, staging a mock battle between them.  The Humans always won, and nobody wanted to be the Yralen.

Finally, he was alone with his despair.  No one was around; he let the tears he’d been holding in fall.

A Yralen laborer scuttled nearby, the kill collar on its neck blinking.  Less than ten thousand left; all laborers, all with a tiny EMP bomb around their neck.

Barkley looked at the Yralen as it picked up debris and placed it in a bag.  “I’m sorry,” Barkley whispered, his tears choking the words.

The Yralen either didn’t hear him, didn’t understand him, or didn’t care.  Barkley wiped his eyes, picked up  his bag, and went home.