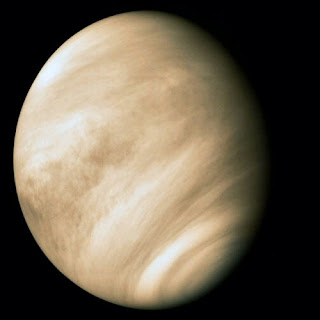 I few years ago I learned that early astronomers, using small telescopes, had discovered what they thought was a moon orbiting Venus. More than one astronomer discovered this moon and documented – only to have it later disappear.

What was going on? Was this some new astronomical phenomenon? A moon that could pop in and out of existence?

No – it was merely a case of mistaken identity. It was later surmised that these astronomers were confusing background stars for a moon. Their apparently close proximity in the field of view of the telescope fooled them into thinking they were seeing a moon.

This idea intrigued me. A lot. So I added it to my list of “neat facts for a possible story.” All writers have some kind of scrapbook of ideas – this one went into mine.

I never did anything with the idea – until last week. My good friend Teri at IrrationalCat, with whom I have been writing for years, wanted to have a back-and-forth Flash Fiction story with me.

This kind of Flash Fiction is fun. Each writer write 200-500 words, a “chapter”, and sends it back to the other to continue. You’re not supposed to flesh out every detail – the goal is to keep the story moving. As such, it is usually bereft of a lot of description. Think of it as building a skeleton of a story, in it’s entirety, before you go back and add the flesh.

So, without futher adieu , I present to you, for your reading enjoyment:


Neith, The Legendary Moon of Venus
by Ron Sparks and Teri Eaton

New chapters will be added as we write them. Please read and comment. Your ideas might get incorporated into a future chapter!