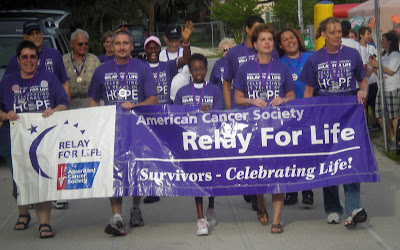 My daughter has a classmate who has cancer. Her name is Ebony and you can see her above right next to me in the picture.

Her teacher formed a team for the Orlando American Cancer Society Relay for Life this afternoon. A number of students and parents attended, along with Ebony and her family, to raise cancer awareness and money for researching a cure for cancer.

As you know, I too have cancer. I was diagnosed nine months ago and have been through surgery, chemotherapy, and radiation therapy. It was a brutal experience, but I pulled through and, so far, I seem to be cancer-free.

I am a survivor.

One of the speakers, the leader of the Orlando Police Department SWAT team, spoke before the Relay started and said that I became a survivor the moment my doctor said “You have cancer.” I never thought about it that way – I assumed I would be cancer free for x-number of years before I adopted the label “survivor.”

If you’ve read my non-cancer blog entries you know I have issues with OPD; I feel many OPD officers abuse their power simply because they can. I must say, though, that the officers at the Relay were what I would consider exemplary ambassadors of the department. I was very impressed with them and even ran a lap with one of the officers, chatting with him the entire way.

Here’s a picture of my daughter Ashlee in front of the OPD armored vehicle they brought to the Relay: 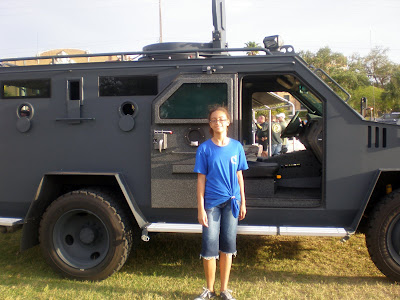 Anyway, this was my first Relay – but it won’t be my last. I was, frankly, surprised at the attention and respect cancer survivors were given. I was a little embarrassed by it, to be honest. I was asked, first, to introduce myself and tell the entire crowd how long I had been a survivor. 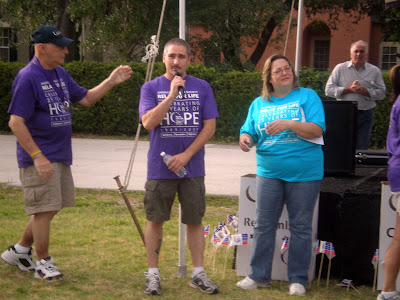 I was a “six-month” survivor. There were some, like the man to my left in the picture above, who had been survivors for 18 years or more. There was only one other survivor as “young” as I was – and he was even younger. He was a 4-month survivor and, strangely enough, his name was Ron too. There were quite a few 1-year survivors, including Ashlee’s classmate, Ebony.

After I introduced myself and endured the thunderous applause, I stood with the other survivors, waiting for the first lap – the “survivors only” lap. 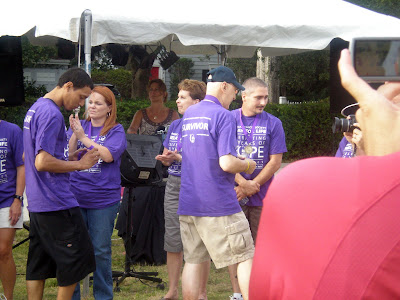 I lined up at the back of the survivors group, because I saw that there was a banner. The front-runners would have to carry the banner and I really didn’t want to do that. I was foiled, though, when another survivor energetically waved me forward and told me to take my place up front with here. So, against my better judgement, I ended up being a banner carrier for the Relay for Life survivor lap.

As we walked the lap we were applauded vigorously. Again, it made me slightly uncomfortable and I wasn’t sure why this was so. I am not afraid to be in the center – I am a fairly good public speaker (although I seem to have lost some of my skill in the past couple of years). So why was I so uncomfortable and embarrassed to be applauded and recognized at the Relay for Life?

After the Survivor lap, we had a “survivor and caregiver” lap – where the survivors were asked to walk with their caregivers. In my case, it was Carey and Ashlee. Our sons were not with us – Christopher was spending the night with a friend and Matthew was attending the Chorus Awards banquet at his high school. Hand-in-hand, Carey, Ashlee, and I walked the lap – again to thunderous applause and my acute embarrassment.

After those first two laps, the track was opened up for everyone. The goal of a Relay for Life is to have a person from each team on the track every second for 18-hours straight. Symbolically it represents solidarity and endurance against a disease that never sleeps.

Ashlee made it a point to walk a few laps with her classmate, Ebony: 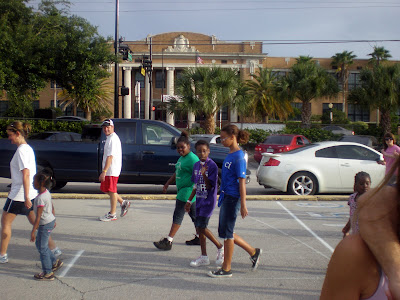 After the first few laps, the next surprise was sprung on me. The survivors were being served a free dinner in the Survivor tent. Caregivers could come too, but only survivors and caregivers for a survivor on the field could attend. Bemused, I allowed myself to be led to the tent and served a very nice meal from Brio, followed by a nice slice of chocolate raspberry cake from Publix: 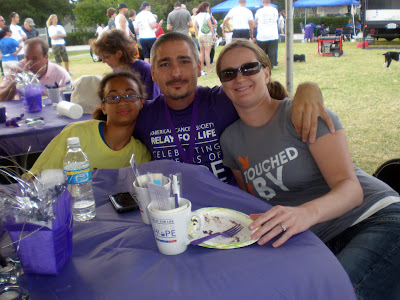 Unfortunately, I couldn’t stay all night – I ran some laps with the OPD cops, I had a free meal, and I was overwhelmed by the attention , but we did have to leave after a couple of hours there. I had no idea what an amazing event this would be – and now I am planning on staying the whole 18 hours for the next one.

I think I figured out why I was so uncomfortable with the attention. Basically, I don’t feel like I deserve the attentions. First, while I recognize that I have a “great attitude” and a “fighting spirit” I didn’t do all that much to save myself. While there is a certain X-factor in my recovery as a result of my attitude, spirit, and prayers of others – the real credit for my survival goes to my doctors and the incredible care they give me.

Secondly, I am still such a “young” survivor that I don’t feel like I have really survived yet. At some level I am still waiting for the other shoe to drop – that I will have to continue chemo and radiation. I felt like a “poser.”

Lastly, while I went through hell in my treatments many people endure much more than I have. They deserve more recognition than me. Additionally, I have never REALLY defined myself by my cancer and, for the first time, I was surrounded by a large group of people for do define themselves thusly and I felt like I was not part of the “crowd.” I felt a little like an outsider and that maybe I didn’t belong because I wasn’t as “hard core” as others.

Silly, I know – but those were my emotions.

Anyway, my messed-up emotional state aside, I will definitely do this again. Cancer survivors and caregivers need this community of support and caring. It really felt good to see so many survivors and to see the community rally around finding a cure for this disease. Next time, I;m creating a team and I’m going to stick it out for theentire 18 hours.