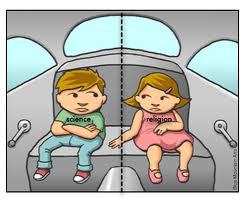 I was raised in a pretty religious household. We went to church every Sunday morning. I was active in Sunday school. I often went to the less formal Wednesday services. I was a geek even then; I looked forward to “Find the Verse” contests where the person who could find a verse in the Bible the fastest won a prize. I was the “youth preacher” from time-to-time; I was the kid they let talk in front of the masses. It was a great honor and I was very proud.

Even as a child, I had a bent towards the logical and scientific. Yes; it’s possible to be logical and religious. Consistency is the key – and not venturing beyond well-established boundaries. For example, I read in a physics textbook by Asimov one time that the ancient Greeks had a perfectly valid logical system of science that revolved around the four Elements; Wind, Earth, Water, and Fire. They were able to build complex machines and perform real science within that framework.

That’s the difference between science and religion. When something doesn’t work in science – we throw it out and try something new. In religion, we tend to keep what doesn’t work and shut out the proof of our senses and observations.

And that’s OK. Faith, as they say, is the evidence of things not seen. Faith doesn’t require science to work. Science doesn’t need a god for validity.

So here we are, celebrating the 40th anniversary of the Apollo moon landings, and I am reminded of the biggest betrayal of religion I had as a kid. This one betrayal forever changed me and put me on the road of skepticism.

I was in sixth grade, searching for meaning in life. Scared to death that I would wake one day and find my parents just a pile of clothes on the floor and that I had slept through and missed the Rapture. I was already harboring doubts about the “facts” presented to me in church and I was feeling abysmally guilty about those doubts. One day, though, I was given a Christian Science comic book by a member of the congregation. The Truth had been revealed to me! This comic became my new Bible. It was amazing – this comic took modern day scientific dogma and refuted it. There were a number of “scientific debunkings” in the comic book. One was about the broken fossil record and how carbon-14 dating was so wildly inaccurate that it would age my cat at 10,000 years old.

But the one that really stuck out – the one that meant so much to a young stargazer such as myself – was the Age of the Universe debunking based on the amount of lunar dust on the surface of the moon as reported by Apollo 11’s crew.

I don’t remember the exact argument, but it went something like this: based on the amount of meteoric dust that fell on the moon every year, there was no way the Earth could be even a million years old, let alone the billions as claimed by scientists. With no tectonic movement to pack the dust and no atmosphere to disperse the dust, it would just lie loosely on the surface, an ever-deeper fine powder that would have sunk the lander into a deep morass of dust, possibly completely covering it, until it finally settled.

Holy cow. I finally had the evidence I needed to not only put my ever-growing doubts to rest but to take it to the masses. I knew something that modern scientists either didn’t know or were covering up.

I spent the better part of the school year, the following summer, and into my seventh grade year at DeLaura Junior High School in Satellite Beach, Florida repeating what I had learned. One day, though, my seventh grade science teacher heard me quoting from the comic book.

I wish I could remember his name, but I can’t. He very gently pulled me aside and introduced me to the concept of pseudo-science. He explained to me that my faith was my faith and science was science. Like oil and water, he explained, they don’t mix well together. He never disparaged my beliefs – but he did take the time to tell me how certain people in religious circles were seeking validity by using pseudo-science to provide proof of their God or religion – or more often to simply debunk anything that appeared to contradict a religious doctrine.

According to Wikipedia: pseudoscience is a methodology, belief, or practice that is claimed to be scientific, or that is made to appear to be scientific, but which does not adhere to an appropriate scientific methodology, lacks supporting evidence or plausibility, or otherwise lacks scientific status. The term comes from the Greek root pseudo- (false or pretending) and “science” (from Latin scientia, meaning “knowledge”).

My science teacher went on to explain the pseudo-science in the comic. The rate of meteoric dust that falls on the moon is much, much less than what my comic book stated. The comic stated the lander should have sank over 50 feet into the dust if the Earth were just a few billion years old. Today we know that the moon accumulates only an inch or two every billion years. A great summary of this lives argument here.

I wanted it to be an honest mistake – but it wasn’t. The amount of moon dust accumulation has been well-known since the 1960’s. My comic was published in the 1980’s. I realized that an unforgivable sin had been committed – I had been lied to by the people I trusted most.

If I was lied to about this issue – what else had they been lying to me about? I was crushed. Completely.

And thus a skeptic was born.

Don’t mix your science and your religion people. They just don’t go together and it’s futile for religious advocates to seek validity by going head to head against scientific reasoning. Faith is faith and science is science.