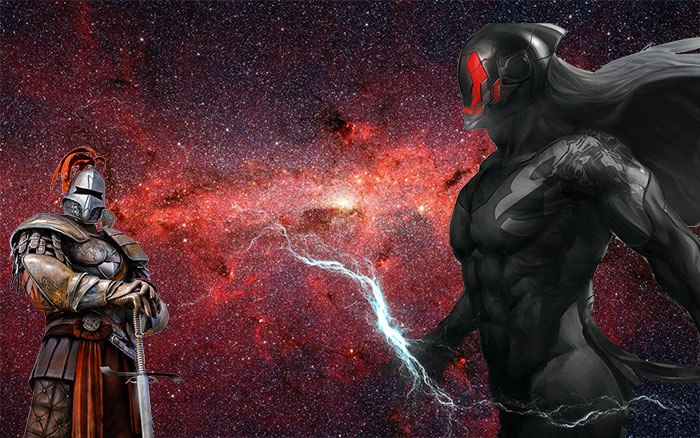 I knew not from whence the sword came. Forsooth, I cared not. The glory and heady days of youth were but distant memories and the only steel needed I was in my hoe and the pin in the ox’s yoke.

Twas sorcery most foul; that was obvious ere I saw it or knew it for a sword. It spake words of terrible magic from inside my hovel. Nay, verily it sang. The sweat on my brow, laid there by a day of toil under the sun and in my fields, turned cold and clammy at the discordant cacophony emanating from behind my door.

Such a noise had never sounded on this Earth, of that I was sure. I near prayed me to the gods for protection as I opened that door ere I remembered I hated them all. Never has any man said that I am a coward. I would confront this tragedy of sound, though I knew it to be folly.

It marked me as I stood in the doorway with one foot in the threshold and one without. I knew me to be standing on the precipice between life and death, so stout were my fears in that moment. Poised to fight or to flee was I, but the unnatural noise ceased and the sword spoke.

And twas a sword, to be sure, like unto none I had ever seen. On the mantle above my hearth, it was black as the heart of a witch. Yet also it glistened with oily menace. It had a long, curved, blade that flowed to a point so fine as to be a mere mote. It boasted a small, round hilt and the handle sported no pommel. Evil oozed from the sword, yet mine eyes could not deny the beauty of it. Nor could my heart deny a longing to wield it. No trumpery was this; this was a weapon to make men and gods tremble.

“I – I pray your pardon?” I could make no sense of the strange words the blade spat at me.

“Get in, or get out, simpleton,” spake the sword. “You’re letting flies in, and they’re liable to roost in your gaping jaw.”

Truth were in the outlandish words; the manure caked on my boots and under my fingernails did indeed attract the flies. In haste, I stepped inside my home and closed the door, though I stayed pressed against it.

“Better,” said the foul instrument. “You might have some brains after all.”

I searched and found the courage of my voice, “From whence came you, vile shank? What horrid spell did I disturb with my entrance?”

“What spell?” asked the sword. The thing seemed not to understand.

“Deceive me not,” said I. “A hideous spell of terrible consequence were you casting ere I came in.”

“You mean the music?” Almost could I see the wicked smile in the words. “That was just death metal. Not a spell.”

“Aye,” I conceded, “I doubt me not that the blood of many righteous souls doth coat your blade and that the Reaper is your companion.”

A wet and bloated sigh escaped the sword, “Look, pal. We’re almost speaking the same language here, but neither of us is making any sense. Am I right?”

It took me moments to parse the words to understanding, but understand them I did after a time. More truth from the blade. I nodded me head, but spoke in the affirmative as well. I was not certain the blade had eyes as I.

“I need your help, cochise.”

“Whyfor?” I approached with caution.

“I’ll lay it out simple. You forswore the gods. And you meant it.”

“You did everything right. You tithed. You performed the rituals, and the sacrifices. You prayed and you lived according to the teachings of your ancient holy tomes. But the gods still took your wife and kids, and left you bereft and alone.”

From my lips, a hoarse whisper, “Aye.”

There was nary a doubt within me. A feeling I heretofore knew never would I feel again swelled within my breast; hope. “What must I do?”

“Just pick me up. Wield me, and you will find yourself face to face with a god, girded for battle and waiting to confront you.”

“Which god,” asked I? Though I forswore all, there was one in particular who held my rancor.

“I dunno,” said the dark blade. “The one you need to face the most. It may not be who you think, but it will be who you need.”

I knew which god I would face. There could be none other. “What get you from this, thou dark serpent’s fang? Whyest thou need my help?”

“I hate them too. The gods left you alone in your stalwart grief and they have trapped me in this existence. I find and recruit god killers like you, over and over again, until I finally kill all the gods. Then I’ll be free.”

Gods were pretty and capricious. I nodded and reached for the blade.

I stayed my hand.

“Touch me and you die. Kill the god or not, you will die. I don’t promise victory. I promise only the possibility of it. Either way, your mortal life ends when you take me up.”

“A final jest of the gods. A curse to prolong my punishment. This is what happens to those who would kill a god. Only the insane or desperate would accept these terms.”

“Then insane am I,” cried I and wrapped mine hand around the haft of the blade. “The gods owe me redress and I shall have it!”

Together, we found ourselves upon the empyral fields wearing etherial armor. Across me, girded as I and shining bright, was my nemesis. I did permit me a grim smile as I strode into battle.

And so we did.