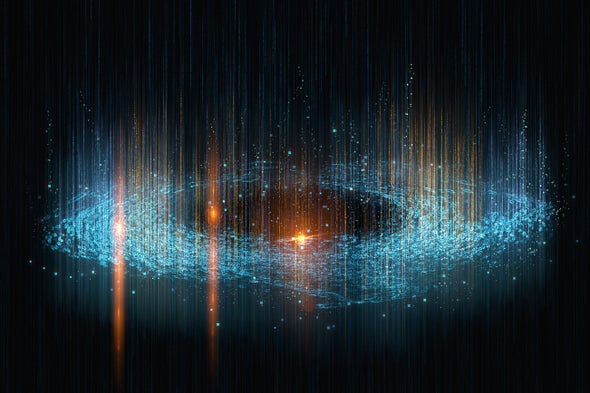 It got you laid in college a few times. Your gift was the only exceptional facet of an otherwise unexceptional math and physics major. With seemingly magical and unerring accuracy you could look at anyone, any living thing, and determine, to the second, exactly how old they were.

As party tricks went, it made you a one-trick pony; you had nothing else going for you. But there were always new freshmen joining a sorority or new to the campus every semester who were wide-eyed and innocent enough to think it made you deep and mysterious. You had no problems using this to your advantage and getting into their pants, if not their hearts.

Now, though, today; even the possibility of gift-given sex no longer held the appeal that it once had. University was a decade behind you and you were stuck, against an intellectual and cosmological brick wall that you couldn’t see a way around, or through. And it was all because of your gift – your ability to look at any living thing and determine how old it was.

You learned early in life that when you looked at any living thing and concentrated, an augmented reality display flashed in front of your eyes showing the age, to the nanosecond, of what you were looking at. You also learned this was not an ability possessed by anyone else.

After a few uncomfortable situations with your family, where you were accused by at least one ape hanging from the fundamental branch of your family tree of being in league with the devil, you learned to downplay and hide your ability as much as possible. This changed when you entered secondary school and you learned it made you popular with all the boys who wondered how close in age they were to their crushes. It made you cool, edgy, and different enough to be liked.

In high-school it again became a stigma – something that made you “that weird kid.” So you learned again to suppress and keep the ability hidden. Then, in college, you finally learned how to use it to pursue the most noble of human endeavors – sex.

Truthfully, if you had to admit to yourself, you had known how extraordinary this ability of your was since your early teens. You, of all the humans in the world, saw the universe differently. You understood that you somehow had hacked into the source code of the universe. Unlike the rest of the world who could only hope and imagine there was more to the reality you experienced every day, you knew there was more. It had to mean something.

Hence the doctorate in theoretical physics and secondary degrees in maths. You would find the secrets of the universe that were only yours to perceive. Except you were stuck. Your calculations and theorems had taken you about as far as they could, and it was not far enough. You were certain that your ability was because the universe was a simulation, that there was a Higher level of reality driving yours, but the math couldn’t quite get you there. You needed help.

For the first time, you made your ability public knowledge. Not as a party trick for sex. Not as a way to make other kids think you were cool. But in the scientific world. You came out of the proverbial closet, shared your gift, and your theories, and hoped the scientific community could achieve at what you had failed – proving not only that the universe was a simulation, but determining the purpose of that simulation.

The scientific world, at first skeptical, soon confirmed your ability and rallied around you. You were a star. Everyone knew your name, in intellectual circles, and a new era of physics and math were ushered in as your work was integrated, refined, expanded, and brought to every major university around the world.

And yet, there was still no certainty that the simulation theory was accurate, much less a reason for it all, although you knew that the why of it was probably best left to philosophers.

In frustration, you took a sabbatical.

In a small café in Barcelona, where you were grabbing an afternoon espresso, you saw something that changed again your perception of reality. Sitting alone at a table across from you, a young boy sat playing a hand-held video game. The AR overlay of your ability displayed an age that was, frankly, impossible.

You stared incredulously at the boy for some time, for the first time considering the fact that your ability might not be accurate, when the boy looked up at you with knowing eyes.

“What are you looking at?” he asked, setting his game on the table. His bearing was much more mature than his appearance suggested.

You cleared your throat, “Excuse me, but how old are you?”

The boy smiled, “Exactly as old as you think I am.”

You shook you head, “There’s no way you can be over thirteen billion years old.”

A sad smile crossed the boy’s lips as he replied, “Ah, but I am, and I am sorry to say you have Seen.” You could hear the capitalization on the word.

In the blink of an eye, you were no longer in the café, and the boy was no longer a boy. Instead, you were in a bare, spartan, room and the sitting across from an old man so deeply wrinkled that his skin looked like it was a suit three sizes too large.

Weathered hands patted you on the knee, “You have Seen a small part of the truth, my boy.”

Strangely, you felt no fear or surprise, although you knew you should have been alarmed and terrified by the events that were happening. Somehow you knew that you were calm because He wanted it that way.

The old man laughed and transformed in a blink into the young boy again. “No, I am not God.” He paused a moment and looked you in the eye, “You can think of me as a white blood cell. Always and forever tasked with keeping the system healthy and free from invaders or mutations.”

You knew, at that moment. And the boy saw the understanding in your eyes.

“Yes,” he said, “the universe is a simulation, but you are not supposed to know this with the level of certainty you have brought to this segment of reality. Knowing, or even suspecting, of your Purpose in the simulation will skew the results.”

Still strangely calm, you ask, “So you’re going to kill me now?”

The boy was now a mature woman, with a stern expression, “No. You have brought this knowledge to many other aspects of the simulation around you. It is not enough to erase you. I must take more drastic measures.”

“You mean to destroy the Earth,” you ask, with a hint of horror and desperation entering your voice.

The matron shook her head. “No, Earth is a crucial node in the simulation. Isolated as a consensus node for the other, freely-interacting, nodes. Destruction won’t do at all.” She smiled at you, “I’ll have to restore a backup and then take an active role in making sure this doesn’t happen again.”

The matron became the old man again. “I cannot say,” he said, “for I, too, am of the simulation and not apart from it.”

He waved his hands in front of your face and everything went dark….

You take a deep breath and open your eyes, smiling as you wave your red cup of cheap vodka and cranberry juice in front of the two freshmen, “If I can guess both of your birthdays, and the hour of your births, you agree to come back to my dorm with me?”