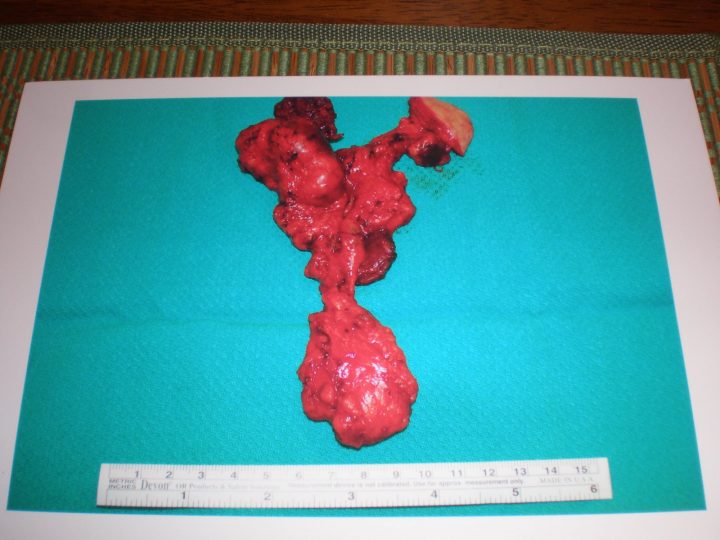 So I am starting to feel human again. It’s taken some time but I can begin to swallow again and am trying to get more than 20 minutes of sleep at a time. Insomnia has set in, though. Now that I am off the pain medications I am all jittery and unable to sleep most of the time. Since my pain medication was a pretty heavy narcotic I assume this is my “withdrawals” and that in a few days it should pass. I hope so.

Carey and I went to my surgical postoperative this morning and received some very positive news. The primary site for my cancer was found and it was my left tonsil. The surgeon told Carey immediately after my surgery, while I was still knocked out in recovery, that he thought he saw some activity in my tonsil but couldn’t be sure. Turns out that left tonsil is my primary site.

So now the primary and only known secondary are gone. I am, as far as we know at this time, cancer free.

The next bit of good news – my surgeon removed 2 attached lymph nodes in addition to the cancerous one (see pictures in previous post). Tests on those nodes showed absolutely no cancer. Since cancer spreads in waves – those nodes would have been infected had it spread further. (in lymph nodes it goes from node to node like connect the dots)

So this is the BEST news I could hope to get. While I am by no means ‘cured,’ I have some extremely positive factors in my favor at this time.

I was diagnosed stage 3 metastatic – so we can’t get too overconfident at this point – but the signs are good. I will have targeted radiation to my tonsil area and maybe a short burst of chemo before the end of the year to mop up any cells that may have escaped.

Next week I have 2 appointments with my surgeon and radiation oncologist (Monday and Friday) but I expect to put in at least a full week of work if I am able. I am going stir crazy over
here.

The end result is that things looks better now – much better – than they did a week ago. I still have a very serious cancer, but the early detection and apparent minor spread of the cancer all were blessings in my favor.

Keep wishing me luck and keeping me in your thoughts and prayers! I need them.