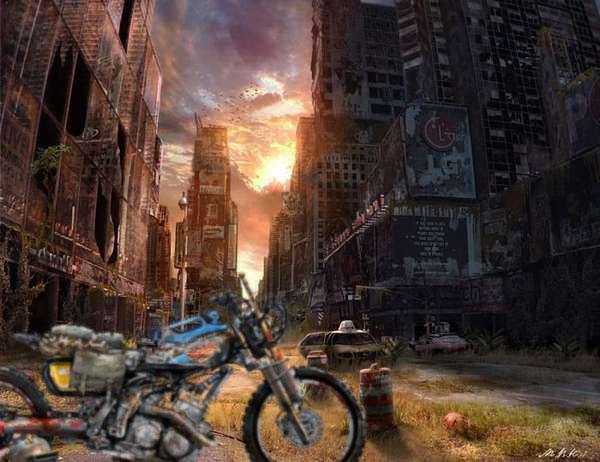 <…where he hid the book. We’ll torture him if we have to.>

<I hear telepaths can tune out physical pain, though.>

Garth winced as he sat up, the pain in his shoulder numbly pounding. He had just picked up the tail end of a conversation, he knew, but details were hazy. He hadn’t been fully awake so had missed the brunt of it.

The light was minimal, but Garth could see well enough to know that he was in a jail cell. Damn! Noise had outsmarted him. The mute had planned all along to turn him in, he just wanted his companions out of the way so he could receive full credit.

There was a plate of food in front of him. Oranges. The only fruit that really prospered in Florida. Garth smoldered as he realized that he didn’t even rate a meal of real food. Still, he was famished. Shamefully, he peeled an orange and bit deep. Soon, he had devoured the whole plate.

Being a man in Orlando consisted wholly of appearances. A real man would never be caught eating an orange if he could help it. No, meat was a man’s food. A man never cried out in pain and always had sex where he would be caught or watched by others.

Noise had probably placed the death of Ian and Darius on Garth’s shoulders. He had proved himself to be a very cunning and intelligent foe. Garth resolved to never underestimate him or anyone with a deficiency again. With little surface thoughts, Noise had effectively been able to hide his true intent from Garth.

Garth decided that he’d been relying too long upon his telepathy. This one mistake could very well cost him his life. Common sense should have been able to tell him not to trust Noise. Still, he really hadn’t had much of a choice, wounded and drugged. He had merely had a choice of victors. Darius or Noise.

Darius was a cold-blooded son-of-a-bitch, but he lacked the intelligence to go far. Noise, on the other hand, was not only ruthless, but extremely intelligent. Reminded him of Brahms a bit.

<…gonna fuck her tonight. Give her a real man, like her husband ain’t.>

Garth sat up; the guard was coming, bolstering his libido as was the wont of his kind. Pushing the bowl of orange peels behind him, he stood shakily to his feet.

As the door opened, bright light flooded the room. Momentarily blinded, Garth covered his eyes,” What do you want, Milo?”

Milo looked beyond Garth to the empty bowl. Contempt for Garth flared up, “Don’t try yo tricks wit me, fruit-eater.”

Without another word, Milo bound Garth’s hands behind his back and led him out of the building. It was a good four blocks to City Hall from the jail and every step of the way Garth was assaulted by Milo’s sexual fantasies.

It was apparent that City Hall had at one time been the most beautiful building in Orlando. Now, a thick layer of lime-green gunk covered the building. Every building was like that in Florida. Garth wished he knew what it was, but nobody seemed to know. It was kind of like mold, but different. Surely they had known what it was, before the war. Mankind had lost so much knowledge!

The seat of Death Ritual’s power was in City Hall, along with Logan, the leader of the gang, and Brahms, the brain behind the leader. Garth picked from the guard’s mind that they were on their way to see Brahms. Apprehension crawled through him like a spider, weaving a web across his body.

Forcing the main door open with obvious effort, Milo shoved Garth through, grinning with obvious pleasure as Garth slipped and fell to one knee, groaning as pain lanced through his injured shoulder. Sex and pain; the only two consistently coherent thoughts in guard’s mind. For a moment, a feeling of shame for what the human race had become welled up inside him. Angrily, he shrugged the feeling aside and stood. The human race hadn’t just recently gone bad. The “glory days” of before the War couldn’t have been so great if the global situation led to this.

Milo turned and barred the door from the outside. No exit there. The other exits were probably similarly barred or guarded. Garth knew where Brahms kept his office. No use putting off the inevitable. Taking a deep breath, he headed towards the center of the building.

A shuffle behind him quickly brought Garth out of his thoughts. Turning quickly, he saw Noise stepping out of a side office. Garth was instantly frustrated that again he had failed to pick up his presence. Even a mute shouldn’t be able to cloak his thoughts so effectively. He must have some skill or ability that allowed him to remain undetected to a telepath.

Garth warily backed up a Noise approached, surveying the area for possible weapons, “What do you want?”

<We made a deal. I promised to get you out if you’d take me with you. Do you remember, or did you just say anything to keep your sorry ass alive?>

“I remember, but it seems to me that you reneged on our deal.”

<I did not. I will still free you, conditionally.>

Garth looked around the dim hallway, lit only by splotches of sunlight filtering in through grimy windows. There was no obvious escape.

“What condition is that?”

<I have managed to repair a copy machine in the Orlando Sentinel building. I need your bike to supply the power.>

Garth was intrigued, but suspicious. He had never actually seen any of the old technology work, except for motorcycles. Still, there had to be a catch. “Why my bike? There are at least fifteen Jap bikes running around town. Use one of them.”

<I do no wish any other members of the gang to know about this project. If I used one of their bikes, I would have to make them aware of what I am doing.>

Suddenly it was clear, “So I’m expendable. You know I’ve rigged my bike so that no one but myself can start it. You use me and my bike, then you kill me.”

Noise leaned forward and grabbed Garth by his injured shoulder. Groaning, Garth reach up and tried to pry the hand away, but Noise had a grip of steel. Noise looked into Garth’s eyes, anger burning in his eyes.

<I am not a liar! I made you a promise and I fully intend to keep it. I can, however, make your escape most uncomfortable if you continue to question my honor.>

Noise eased off on the grip and Garth’s breath exploded from his lungs. He hadn’t realized he’d been holding it. Garth leaned against the wall, taking a moment to catch his breath.

“I’m sorry Noise. I will try to accept that you are an honorable man. However, when I woke up in that cell, I hated you more than I’ve ever hated anyone in my entire life.”

<After you lost consciousness, the other gang members who couldn’t keep up finally found us. I was forced to administer the antidote secretly and allow them to take you to the jail.>

<Yes. Your capture complicated matters, but did not change my original promise to you. We must leave now and you must tell me where you hid the Book.>

Garth frowned. Although he didn’t like Noise, he really had no choice but to trust him. It seemed that he had the choice of lesser evils. Take his chances with Brahms and hope that he would be merciful or go with Noise and anticipate betrayal the entire time.

<I do not wish to keep it. But you know how hard it is to find a book on the combustion engine. Our bikes are falling apart and we really have no knowledge as to how to repair them.>

“So you plan on staying with Death Ritual?”

<Yes, if I can copy your book. I have already been granted Full membership for capturing you. A copy of yor book will elevate my status immensely and secure my position with the gang permanantly.>

Garth help up his good hand. “Ok. I help you copy my book and you do whatever it takes to get me as far away from Orlando as possible.”

<Deal.> Noise reached forward and gripped Garth’s hand in a firm handshake and led him out of the building. <We have to hurry. I about an hour, word will be out that you’ve escaped. We must get your book and into the relative cover of the Sentinel building soon!>

Garth nodded his head. “I hid the book in a locker in the Sun Bank tower. Let’s go get it.”