This is the third post in the “Cancer Support” series, as I have decided to call these blogs. The first and second in the series are:

Part 1: Living With Cancer – Understanding Sycophants
Part 2: What do Fish and Cancer Have in Common?

One of my readers asked me some very good questions last week. She asked me:

I realized that Parts 1 and 2 of this series chastised the sycophants and Remoras but did not begin to TELL you how to be a real supporter of someone who is battling cancer. I have been remiss, but I intend to rectify that here. This is the first of a couple of posts designed to answer my reader’s questions.

How Can I Tell My “Supporter” that He/She is NOT Helping Me?
This is for the cancer fighters out there. Understand, of course, that I am offering only my opinions here, but I will dispense with my advice since I was asked.

You have a person in your life who is not a real supporter. This person asks the wrong questions, tries too hard, makes you feel vaguely uncomfortable – tells you that you should be cheerier, or should pray more, or should “make the most” of every day. She doesn’t give you any breathing room, or gives you too much breathing room. There’s a thousand things the non-supporter can say or do to make you uncomfortable – and it’s different for each of us. What makes me uncomfortable might be perfectly acceptable to you. So, how do you deal with it when you realize someone isn’t supporting you properly?

The answer is simple; be honest with people. It’s OK to look them in the eye and say, “Thank you, but what you are doing is not helping me right now.”

The thing is, most people are uncomfortable around you as it is. They have no real notion of what you need and you have to tell them. Just like you are in charge of your health care, you are also in charge of how your support network operates around you. That’s worth repeating because so many people don’t consider that point.

YOU are in charge of your support network.

It never fails. If you are not overly-religious, you will have that one relative who wants to grab your hand, bow her head, and share prayer with you. If that makes you uncomfortable, let them know. Of course, then you have to deal with the consequences of that – you have to “come out of the closet” about how uncomfortable it makes you and deal with the ensuing questions about your spiritual disposition. A lot of truths, uneasy truces, and unspoken assumptions are called into question when you have cancer.

Understand that you are under no obligation to change who and what you are because you have cancer. If you were spiritually on the fence before you got cancer, it’s OK to stay that way. Even if you have a friend/relative who presents you with Pascal’s Wager, hoping you convert “just in case” your cancer bests you, it’s OK to refuse.

You will have that “always cheery” friend who smiles so hard around you that you will swear his face will freeze in some rictus parody of the human face. This person thinks that the best thing you need is happy people around you, and will continue with the charade, until you tell him differently.

You will have that weepy relative who starts shedding tears the second she sees you. She’ll grab your cheeks, crying, and just say your name over and over again. It was fine the first time it occurred, but every single time she sees you becomes tedious and you begin to dread her visits. you have to find a way to make it stop.

The hardest to deal with, of course, is the person who has been a cancer supporter for someone else in the past. This person often believes that what they did for the other person should work for you as well. And that’s not always the case.

So how can you tell people what you need?

The best way, of course, is to tell them explicitly what you want. Of course, many people are uncomfortable with this, and when you first get diagnosed you may be too far into your shock to be honest with yourself, let alone others around you. So patience is called for here.

You can tell your “serial pray pal” something less direct than “I don’t want to pray with you.” You can be polite and say something like, “Yes, please come visit me, but leave your Bible and bring your Scrabble dictionary instead. ” Distraction is your friend with some people.

You can passively refuse to participate. When the “weepy relative” rushes at you, you can pull away and change the subject.

You can have “backup” with you; a friend or relative who understands how uncomfortable you are and steps in to defuse the situation or change the topic.

Dealing with cancer is a new and unexpected variable in your social circle – but objectively it really is nothing more than that. A new variable. Like finding our your buddy has a third nipple – at first it’s hugely interesting and entertaining and everyone wants a peek, but over time it becomes part of the “group knowledge” you share with your circle. Time and familiarity will make it a non-issue with the people who matter to you.

The thing to remember is that figuring out what you need is a process, and what you need will change over time. Be patient with the people that stick by you and understand that very few are truly bad supporters. In the absence of direction, people tend to fall back on what they know. They aren’t mind readers and are looking to you to let them know what you need.

Expect your friends to slip up, say the wrong thing, offer the wrong advice, and generally trip over your cancer until you establish a new groove and new routine. It’s going to happen. Nobody INTENTIONALLY gives you bad advice (like the image below). 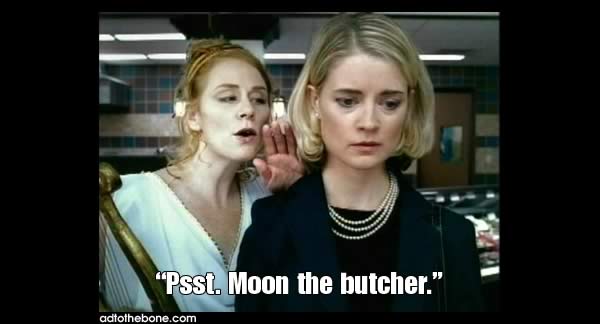 Just remember, your supporters love you and you love them. Give them time. Give them a chance. They will not only live up to your needs and expectations; they will exceed them.

If you’re supporting someone who has cancer, and wonder if you’re doing the right things; ask.