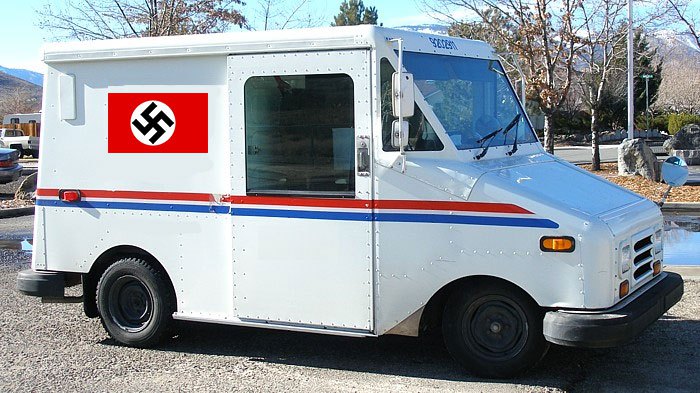 “Guten Morgen zusammen,” said Marion to the room as he walked into the office and hung his coat on the rack.  He smiled across the cube farm as a ragged chorus of “good morning,” “guten Morgen,” and “Hallo” returned.  He was proud of the efficiency of his team; the Washington, DC branch of the Amerikanisch Post was second to none in mail delivery and was the envy of mail branches across the country.  He, as Postmeister, made sure of it.  He loved the job as much today as he did twenty years ago.

He sat at his desk and turned on his computer monitor.  The day’s work queue filled his screen.  The warehouse had over four tons of mail to sort.  Three percent of his Briefträgers had called in sick or were on short term disability.  Without those mail carriers his overall efficiency would dip one point two percent.  Sixteen delivery vehicles were in garage.

He gave the screen a severe frown, but was not unduly displeased.  He had the manpower and resources to deliver all mail and prepare for the next day.  Rain, sleet, or shine the Amerikanisch Post would deliver the mail.

His Sekretärin walked in with his morning coffee, the rich aroma erasing the frown on his aged face.

“Danke, Zelma,” he accepted the coffee and blew across the top of the steaming mug.  “Do we have any news from Berlin today?”

“Ja, Herr Beuller.” She consulted her tablet, “Der Führer will give a speech tomorrow in London at Buckingham Palace.  Security is high as there is intelligence that terrorists may attempt to disrupt the event.”

Marion sipped his coffee as he gathered his thoughts, “I’m sure the Schutzstaffel are keeping mum on the whole thing?”

Zelma nodded, “Ja, the SS has not issued a statement.”

He nodded, “Remember, last time, in Cairo the terrorists slipped a bomb through the Post.  We were lucky it exploded in transit and not in the building Der Führer was in. We need to step up security here for the next week, Zelma.”

“Why here?” she asked. “London is across the ocean.”

“Sensible precaution.  Every time a terrorist attacks overseas we see something over here in Amerika.  The Amerikaner wear the yolk of occupation poorly.”  He stood and stared out the corner window of his office, overlooking Führer Park, where the old Washington Monument had once stood.  “You and I are both Amerikaner, Zelma.  We have risen to respected positions in our work, but there are those who still think we are quislings.”

Marion failed to see the dour look that crossed his Sekretärin’s face, but he could hear it nonetheless in her tone. “The war’s been over for over seventy years.”

“Yes, but the children of Amerikaner soldiers are today’s terrorists.  It will be another generation, at least, until Amerika is a part of Deutschland and not an occupied territory.”

“Yes, but Amerika lost the war when Deutschland nuked New York and Chicago.  My grandparents were in the Bronx when it dropped.”

Marion turned and looked at his Sekretärin, “I’m sorry.  I didn’t know this.”

She shrugged, “It’s not something you talk about.  If I talk about it, it’s assumed I am bitter and I get a visit from the SS.”

Marion watched her struggle with her response, but twelve years of working together let her speak the truth.  She nodded, “Sometimes.  I would have liked to have known my grandparents. But it’s not practical to worry about what might have been, so I don’t usually think about it.”

Marion spread his thumb and forefinger about a centimeter apart, “You know, Amerika was this close to getting nuclear weapons first.”

Zelma shook her head, “No, the Amerikaner were nowhere close to nuclear technology.”

“They weren’t, but they actually had the idea before Deutschland.  Only a mistake in the old US Postal Service prevented them from getting a jump on nuclear technology.”

Marion walked back to his desk and unlocked the bottom drawer.  With gentle hands, he retrieved an old and yellowed envelope and lay it on the desk.  Zelma walked up, her heels making loud clicks in the reverential silence that accompanied the letter.

“This,” said Marion, “was passed on to me from the last Postmeister, who got it from the one before him.  This is why I work so hard to make sure our branch of the Amerikanisch Post is the best in the world.”

“What is it?” asked Zelma in hushed tones.

Marion extracted the letter from the envelope and spread it on the table, “It’s a letter from two Hungarian physicists and a defected German physicist to the President of the United States.”

“Read for yourself,” said Marion.  “It is a warning from these respected scientists that Deutschland might develop nuclear weapons.  It urged the President to start their own nuclear program.”

“This was written three years before Deutschland developed the bomb!”

Marion nodded, “Yes.  And these scientists had the ear of the President.  Had this letter not gotten lost in sorting, I believe the war would have gone quite differently.  So did my predecessors, which is why this letter stands as our warning.  Through loss of a single letter a war was lost and we speak more Deutsche than English.  The first atomic bomb might have had an American flag on the nose instead of the swastika; and it might have fallen on Deutschland.”

Zelma looked up from the letter, “Who knows about this letter besides you and the former Postmeisters?”

Marion shrugged, “Everyone who matters.  We are not encouraged to talk about it though, because it contradicts the Nazi narrative that they were always superior.”

“And the scientists in the letter?  What happened to them?”

“Lost to history.  I’m pretty sure one of them died from cancer – he lived just outside the New York blast radius in New Jersey.”

“Why did you share this with me, Herr Beuller?”

Marion smiled, “You’ve been doing my job for three years now in all but name.  My retirement is upon me. How does the title ‘Postmeister’ sound to you?’

This story explores what might have happened had the Einstein–Szilárd letter failed to deliver to President Franklin D. Roosevelt in August of 1942. It takes a big assumption that America would not have ever developed a nuclear program had this letter not been delivered and that Einstein (and others) wouldn’t have just sent another letter or picked up a phone, but just go with it, ok? ?