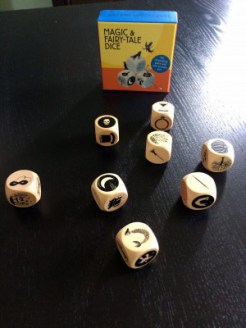 “It wasn’t supposed to be a pumpkin, you know.  They play hell on transformation spells.”

Elsie would know; she was, after all, a level seventy-four Witch.  Her conical hat was embroidered with the crest of our Order, and rumor had it she was next in line to become Matriarch of the order.  Of course, the current Matriarch would have to die first.  Considering the Deal Marhkat had made with certain Powers, the chances of that happening anytime in the next few centuries was slim indeed.  Still, accidents did happen.  Rather more frequently the higher in the Order on rose, as happenstance would have it.

“What was it supposed to be?” I dutifully asked, even though Elsie had passed this tidbit of knowledge on to the rest of us on at least three prior occasions.  I winced inwardly at the sound of my voice; I still wasn’t used to the glass-on-chalkboard grating that emerged from my mouth every time I spoke.

Elsie raised a wrinkled hand and pointed a long, bony, finger at us. Dirt and grime under the jagged nail caused me to blanch as the appendage came within millimeters of my own pointed and hooked nose.  “Pumpkins are not native to the land here.  They come from the New World, and New World magic works best with them.  Here, we need…”  She reached behind a jar with filled with brine and the eyeballs of a dozen frogs and whipped out … “a turnip!”

“Then why did the Fairy Godmother use a pumpkin?”  I looked over at Mildred as she asked the question.  Ass-kisser, I thought sourly.  The Cinderella story was hundreds of years old and was certainly not accurate anyway.  Mildred knew this, but currying favor was her specialty.  Her spells certainly were sub par.  She even had to use a wand to perform them.  It would take a miracle for her to reach even level ten, and the Deal we had each signed in blood to become Evil Witches pretty much made miracles an impossibility.  I cackled softly to myself at the memory of coating her wand with poison from a South American amphibian.  Mildred’s hands were still puckered with boils.

“Because,” hissed Elsie, “she was an amateur!  A rank, unqualified, run-of-the-mill, boneheaded, ignorant, amateur!  Fairy Godmother was more interested in the latest fads than in magic.  Pumpkins were the rage back then; newly introduced from the New World.  Every witch, good and evil, was curious about the effect a pumpkin would have on spells, recipes, and incantations.”

Elsie paced the classroom, stopping to pick up a skull from her desk.  She showed it to us, a hideous snaggle-toothed grin on her face as she did so.  “This was my ex-husband.”

None of us were shocked by this revelation.  I, myself, had an eye on a male suitor; a computer programmer for some financial firm.  My befuddlement potions were doing an excellent job of keeping him from the realization that I was an ugly witch with scales instead of skin.  He would make an excellent lich as soon as I progressed far enough to master the spell required.

“The potion,” continued Elsie, “that killed my ex-husband was derived primarily from the stalk of a pumpkin.  Pumpkins are excellent in Destruction and Conjuration spells.  Never transformation.”

“But you can use a pumpkin for transformation if you absolutely must, right?” asked Mildred again.  She was determined to milk this trite lesson for all it was worth.  I sighed and plotted the ways in which I could kill her and make it look like an accident.  I saw the seething glares of my fellow students and realized I was not the only one.  Mildred’s time was nearly up.  Just a few more grains of sand in the hourglass of her life.  I hoped nobody got to her before I did.

“That thick headed twit used a pumpkin, yes,” screeched Elsie.  “And it put a time limit on every spell she cast that night!  No matter what spell Fairy Godmother cast that night, there was an expiration.  Because of the pumpkin.”

“Midnight,” said Elsie, with finality.  “If Fairy Godmother had used a turnip, as she should have done were she not trying so hard to ‘be cool’,” her skeletal fingers mimed air quotes,  “her spells would have lasted the standard twenty-eight days.”

“So,” said Mildred, oblivious to the venom dripping from the eyes of every student in the class, “her coach, her dress, her party mask, and her iconic glass slippers all expired at midnight because Fairy Godmother made a mistake in using pumpkins for Transformation.”  She made it a statement, not a question.  But Elsie didn’t mind; the old bat actually seemed to enjoy the sucking up from Mildred.

“And then, rather than admit her mistake, she gave Cinderella only a scant few hours to find her Prince and make him fall in love with her!”  Elise hissed again, spittle flying from her chapped lips.  She was truly upset, and curiosity flared like brimstone in my breast.

“And yet she succeeded,” I said.  “Cinderella’s Prince fell in love with her and turned a kingdom upside down to find her.”

“Where was the evil witch?” I asked as a terrible realization slid down my gullet.  “There’s no mention in the story of the evil witch who should have been there to thwart Fairy Godmother’s efforts.  Did someone drop a house on her?”

“Once I saw the pumpkin,” whispered Elsie with feral cat intensity, “I laughed, jumped on my broomstick, and flew away.  There was a better chance of a mermaid flying than Cinderella causing a Prince to fall in love with her in just a couple of hours.”

“So it’s all true,” I said in surprise.  “The entire Cinderella story is true?”

Elsie nodded, “Yes.  It’s all true, and it’s my greatest failure in over seven hundred years as a Witch.  Let this be a lesson to you all; never be derelict in your duties as an Evil Witch – because Good Witches are always luckier than we are.  Only strict attention to detail and planning for every contingency can combat the confounded luck of the Good Witches. Now go,” she said dully, “Class is dismissed for the evening.”

“I’m sure you never made another mistake,” said Mildred primly as she gathered up her books and wand.

I didn’t hear Elsie’s response as I grabbed my broom and flew into the waxing moon, plotting my move against the teacher’s pet.

(My friend Stephanie bought me “Magic and Fairy Tale Dice” for my birthday.  You roll the dice and make a story out of the results.  This is my first story from the dice.  Dice rolled were:  mask, mermaid, moon, skull, wand, frog, hourglass, pumpkin)