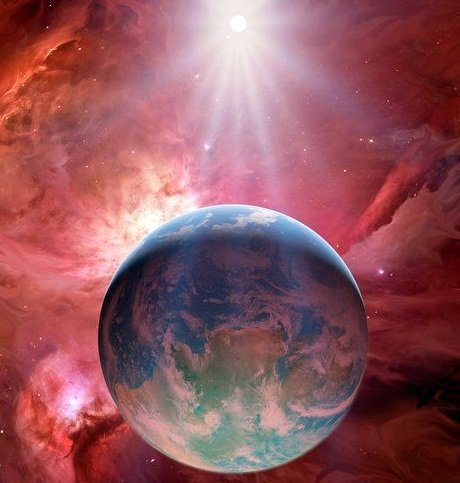 The inside of the Orion Nebula was little different than normal space.  Padraic was disappointed.  He wasn’t sure exactly what he had expected, but this wasn’t it.  He couldn’t even see the nebula from his vantage point deep inside it.  He had an easy view out of the nebula and there were no visible clouds of interstellar dust casting shadows, even though his understanding was that visibility was twenty percent diminished by virtue of being inside the nebula.

Apparently, one should enjoy a nebula from thirteen hundred light years away and not from within it.  There were no familiar constellations outside the viewport of the ship, but it looked like a night sky he would expect to see from Arsia Mons, the mountain range close to his home.

With a bloated sigh, Padraic turned from the lackluster view and took another slurp of his alien pudding. All the food served on this transport was gooey slop of some sort.  They said it was molecularly balanced to meet his exact dietary needs.  It tasted like he imagined dirty plasma exhaust would taste, but it was healthy.  So they said.  His sigh caused a Tripodian to jump and scurry away from the unpredictable human.

As the only human on board, Padraic had grown used to the suspicious stares and avoidance of the crew and his fellow passengers, but he didn’t appreciate it.  Not a single entity had taken the time to mutter even a polite hello during the six month journey.  They treated him like an uncaged lion, fearful of his every move.

He supposed there was some reason to be wary of his physical presence.  Mars was a high-gravity, oxygen-rich, world compared to most alien systems.  As such, the median Martian was stronger, denser, faster, and had more endurance than even the most fit alien, with only a few exceptions.  Exceptions that were not on this cruise.  Humans would be even stronger on average had Earth survived the terrible onslaught of the Invasion, but it had not.  Earth was gone and New Earth was only seventy percent Earth norm in gravity.

Of course, the Invasion was on the mind of every alien he encountered as well. This was the real reason the passengers steered clear of him.  Of all the species in this quadrant of the galaxy, only Humans and the  Yralen had committed wholesale genocide.  And only humans had succeeded, completely obliterating an entire race.

Two hundred years was an instant on the galactic scale; it may as well have happened yesterday.  The galaxy wouldn’t soon forget the ferocious and terrible nature of the Human race.  And humanity wouldn’t forgive the universe anytime soon, either.

We had reason, damn it.  The Yralen had destroyed the Earth without so much as a single radio message from their Invasion force.  No chance to negotiate.  No opportunity to surrender.  Only the fledgling Martian colony had survived, along with a few scattered outposts in the Sol system.  Dumb luck, the overwhelming effort and sacrifice of a few brave warriors, and cosmic providence were the only reasons humanity survived that fateful day.

The aliens called the Human race insane, but how could they understand something as monstrous and as horrendous as having your entire home world destroyed?  Fourteen billion people were killed. How dare they sit in judgement of the entire Human race for refusing to lie down, give up, and fade away into galactic obscurity?  Pardaic forced his clenched fists to relax; no need to prove them right by lashing out at an ignorant and fearful Tripodian.

How could they blame us for taking the fight back to the Yralen, thought Padraic?  After the desperate forces of Earth destroyed the Yralen armada, the survivors had no idea if the aliens would come back to finish the job they had started.  With less than half a million humans left, humanity was ripe picking for any alien conqueror.

We didn’t start the war, but we damned sure ended it. The Yralen unleashed a terrible human trait: revenge.  Humanity rebuilt and made sure the Yralen would never again be a threat to anyone in the universe.  They deserved what they got.  We built New Earth on the bones of our would-be conquerors.

As a result of the Invasion, most humans were extreme xenophobes, even today.  They wanted nothing to do with any alien, no matter how benevolent.  Likewise, the quadrant had adopted a policy of forced isolation for humanity, enforced with brutal effectiveness by the Tripodians and their superior technology.

The Tripodian fleet penned humans in a sphere only a hundred light years in diameter, allowing no unscreened human or human vessel to travel outside this “Containment Zone”.  Humans were caged and the universe was afraid to let them out.

Only a select few humans, like Padraic were deemed harmless and allowed to mix with other alien cultures.  The more enlightened races of the galaxy strove for human rehabilitation and eventual integration into galactic society.  They have complete faith in their screening tech.  I’m a ‘harmless one.’

As the transport ship docked on Tripodian Prime, Padraic disembarked and stared in awe at the beautiful world around him.  Tripodians were a race that lived in complete harmony with their planet.  The planet was a virtual Eden, more pristine than even New Earth.  Tripodia was only sixty percent Earth norm, but it was a paradise in every other way.  Except one.

Biting down in savage determination on his false tooth, the untraceable bio-chemical agents within mixed to form a deadly toxin that targeted higher Tripodia-evolved life forms.  With another sigh, Padraic released the toxin into the atmosphere.  Smiling, he bought a map from vendor and thought about where he would live once all the Tripodians were gone.

It isn’t Earth; but it will do.